Our Executive members come from different countries and associations with different goals and objectives. We have interviewed André Brunnsberg for you. 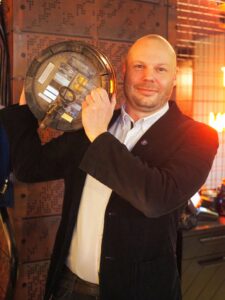 Hello André, and happy New Year! You have been a part of EBCU Executive for a while now; can you tell us what is your role and what you have been up to lately?

Hello! I got elected to become an EBCU executive in autumn 2017 in EBCU’s delegates meeting in Monza, Italy. Since then, I’ve been a bit of a multi-tasker, now my main role are the finances of EBCU so I’m currently wrapping up the year of 2021 and planning a budget for 2022. I also would like to do something with beer & food to attract interest in that field, it still is very wine focused although I do also like good wines.

On December 21st you have received a price from the Beer Association, and you have been organizing the Beer Association’s National Home Beer Competition since 2017. Can you tell us how the competition has evolved those last years? As a judge, have you witnessed some changes in how beer is brewed, in the beer styles?

When I took over the competition “Valtakunnallinen Kotiollutkilpailu” (The national homebrewing competition) it was quite small, around 30-40 beers. I wanted to modernize it, give the competitors proper feedback on their beers, and invite more judges. This year we had over 200 beers and about 100 competitors from all part of Finland, so things have evolved in a nice direction. The quality of the brews has also improved a lot, the best beers beat many of the commercial ones. As for the beer styles, the competition is a good sign of upcoming beer trends. We already could see this year that New England IPAs aren’t as trendy as last year and that we now have a really big variety of styles being brewed. Still Belgian styles are lagging a bit behind, let’s hope we got more of those in 2022!

You are also part of the Sällskapet Ölarne beer club. What do you do exactly? What is your role?

Me and my friends founded a beer club back in 1997 with the main aim of keeping up our friendship and supporting each other, beer was chosen as the perfect glue for this. 😀 We have our annual get-togethers, we also do beer travels together around Europe, usually in smaller groups as most of us are family fathers and not everyone can always make it. We also of course like to hang out in pubs to sample great beers. We used to do more beer tastings and brewery visits in the past but lately we have mostly focused on the social part, which of course is also very important.

Of course, you are also a homebrewer. What are your last brews? Do you participate to competitions? Did you pair your Christmas food with any homebrewed beer?

I’ve been homebrewing for over 20 years, so it’s been a long going hobby for half of my life. I haven’t participated in competitions for a very long time, but I sometimes tend to sneak in an anonymous bottle of two into the homebrewing competition that I organize just to get an honest opinion on my beers. J

I like to brew all kind of styles, for this Christmas I brewed both a traditional bock that went well with the ham I smoked and a dry and hoppy Belgian tripel which was great with cheese. Next up on my brew list for January is both a New England IPA and a Cascadian Dark Ale / Black IPA, they’re fun to brew and the focus is on combining different hop varieties. I this time went with Citra, Mosaic and Lemondrop for the NEIPA and Citra, Centennial and Chinook for the dark ale.

What is your top 3 Finnish craft beers?

Thanks a lot for your time! Do you want to add anything for our readers?

Support your local brewer, they will need us beer consumers also in 2022!

Barcelona Beer Challenge is a Spanis...

EBCU decided to approve German Beer Consumers ...
View All
We use cookies on our website to give you the most relevant experience by remembering your preferences and repeat visits. By clicking “Accept”, you consent to the use of ALL the cookies.
Cookie settingsACCEPT
Manage consent