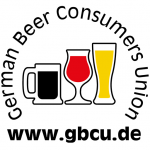 EBCU decided to approve German Beer Consumers Union (GBCU) as full members of the union at the autumn delegate meeting in the Netherlands on October 16th, 2021. GBCU has been an associate member in EBCU since 2019.

The goal of the GBCU is to give a voice to those, who love to drink their beer – but responsibly. The have three main goals: First they want to keep the broad Germany beer variety alive, especially in the gastronomy and trade. Second they want to emphasize the necessity of transparency about the ingredients and the real production place of a beer. Last but not least it is also about having a fair pricing for both sides, consumers and brewers.