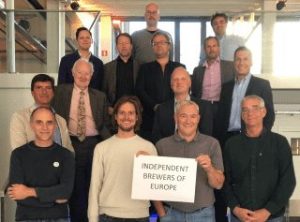 The independent craft brewing associations of nine European countries have announced successful discussions towards the formation of a new body, the Independent Brewers of Europe (IBE), whose aim is to work together to promote and advance the mutual interests of their members with the European institutions and media. Bodies from France, Italy, Denmark, Ireland, Sweden, the United Kingdom, Spain, Netherlands and the Czech Republic, all of whom represent smaller, independent craft brewers, agreed their plan at a meeting in Brussels. With approaching two thousand member breweries, the nine organisations represent a growing proportion of Europe’s brewers, producing local, artisanal beers of quality and character that drinkers demand. They employ local people and encourage the responsible consumption of their beers in social settings in their communities. The IBE intends to convey its message both politically and commercially in Europe, where the small independent producer’s voice is often not heard.

Mike Benner, Chief Executive of SIBA said:
“We’re very pleased to see progress in establishing a much-needed voice for independent brewing organisations across Europe. The craft beer revolution has spread across the continent and with well over 5,000 breweries the sector is well-placed to supply the diverse range of high quality beers demanded by today’s discerning drinkers. We know that beerdrinkers in the UK care about the provenance of beers and it’s clear that the same applies across Europe.”

“Bonded by our independence I hope a strong and united voice will result from these early discussions. The European beer market remains dominated by global big beer, despite the swing in consumer demand to craft-brewed beer. As the UK’s exit from the EU draws closer I’m pleased that we will be able to work with groups similar to SIBA to the commercial benefit of our members, sharing best practice and ideas to help develop the sector for all.” The organisation aims to become a central point of contact for the European institutions and to field representatives to make their case on issues of concern, such as regulation, taxation and access to market, and invites similar bodies from other countries to join them.