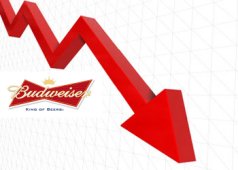 Last week, AB InBev announced it would be cutting the dividend paid to its shareholders by 50% this year, a move which caused the already poorly-performing stock to instantly drop a further 10% in value. The company is still carrying a debt of $109 billion following its acquisition of SAB Miller in 2016, and reducing the dividend is one way in which the management hopes to ensure stability and longevity.

Chief Financial Officer Felipe Dutra added that currency fluctuations and declining sales had also contributed to the poor outlook, while the financial papers noted that rivals Heineken and Carlsberg had not been facing the same level of difficulties.

According to The Financial Times (link), AB InBev’s challenge is to expand its market share using the companies and brands it has acquired, rather than simply focusing on streamlining and cutting costs, and adds that the continued support of its capital investors may well depend on this being achieved.