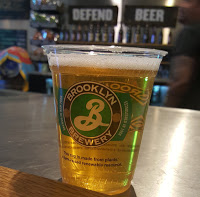 Revamped company to be run as joint venture with Brooklyn Brewery.

Following on from the announcement in May of its interest in purchasing a UK craft brewery, Carlsberg today revealed that it had bought Hackney-based London Fields Brewery. London Fields was perhaps better known for its short but colourful past than its beers.

Its founder, Julian de Vere Whiteway-Wilkinson, started the business in 2011 upon his release from prison having served a 12 year sentence for cocaine smuggling and with tax arrears of £3.2 million. The company then failed to pay any taxes for the years 2012 through 2014, and hit the headlines at the end of that period following a raid by customs officials. Wilkinson remained at the helm, though when it reopened in early 2015 it was announced that brewing would be outsourced to other producers, leaving the facility operating solely as a taproom. As recently as January 2017, Wilkinson appeared in court to answer charges of tax evasion totalling over £700,000.

Carlsberg already runs a number of joint ventures with Brooklyn Brewery, including Nya Carnegie Brewery in Sweden and EC Dahl’s in Norway. It seems that Brooklyn will be the main driving force behind the redevelopment of London Fields, a notice on the brewery website welcoming it to the Brooklyn family. As well as the longstanding relationship with Carlsberg, Brooklyn is also 25% owned by Japan’s second-largest brewer, Kirin. The company has said it will now concentrate on building a new brewhouse at London Fields and finding a suitable production facility for its bottled range.